Retrospective Outfit Of The Day

There was a week of Indian festivals recently and even though I don’t celebrate them I have friends who are more involved in the social/community side than me who like to take me along in order to act as a buffer and moral support for when they need a breather from the extended family. Also in a room full of South Asians I’m inevitably the only Blonde (most people will have Black or Brown with a rare Aubern) and so that gives my friends an edge as a talking point as some of their question time from aunties/cousins etc is given over to discussing me rather than the “when are you getting married/going to have children?” and other massively intrusive fayre made all the more uncomfortable coming from people they rarely see, related or not. Plus I have always gotten on better with older people so they can leave me talking to them knowing I’m likely to make a good impression on their behalf.

So what does being the only person not related to anyone mean for me? Well I get to see some friends, dress up and there’s usually quite a bit of vegan friendly food which I can also take home with me 😉 Also at formal occasions it’s far less likely for people around my own age (especially guys) asking or demanding why I’ve coloured my hair this colour and a darker colour would suit me better, seconds after we’ve been introduced or by way of introduction and feeling the need to humble me because having such bold hair to them translates into me being an overly confident woman who thinks too much of myself *roll eyes*. Once in a while they’ll be a female who’ll make pointed remarks or passive aggressive ones like “if they want to go Blonde fine but they should colour their eyebrows too, they look so weird” etc, basically comments in the same vein as people thinking people of certain skin tones shouldn’t have bright hair colours – I’ve found it’s usually when they’re trying to impress or influence a guy though so I find that more pathetic than incensing. The older people tend to just ignore it/pretend otherwise and that’s fine by me. (On the whole it’s better than guys outside who having failed to get my attention or come on to me turn malicious and  rant about how ugly I am or how this colour looks wrong. I am polite btw but at the same time don’t like familiarity or over familiarity from strangers, either way I don’t do/say anything provocative of that ridiculous sort of behaviour. If people can’t take rejection no matter how polite, they should stay from others until they’re more able to since ‘asking’ to them is actually ‘expecting’.) On the flipside I’ve noticed older women who after getting to know me a bit start to appreciate my look though I suspect a part of that is because despite being Blonde I have nostaligically traditional features e.g. petite, even rounded eyebrows, almond eye shape and even though the hair colour is different it’s traditionally long. I’ve been brushing it a lot this year (I know that sounds weird lol) to look more formal but usually I leave it in the big curls or ringlets it makes, whichever it prefers. Most South Asian females of my generation and definitely those younger tend to be taller, thinner, generally wear dark colours (excepting light Grey and pale Pink), ‘natural’ shades of make up, wear smart-casual clothes, cut their hair a lot and straighten it so my wild hair and bohemian style has that ‘ethnic touch’ too.

Ok so here is the first outfit, I have one more to get the photos of and then I am seriously going to try and make some ootd posts on the actual day! I will do it! The tortoise/turtle WILL get there 😉

P.S – I really wanted to wear Gold sequined wedges with this but I don’t have them anymore! 😦 However that would have meant not wearing tights and since I abhor showing skin let a lone a lot of skin that would have posed a conundrum. Particularly as finding clothes to layer with traditional Indian ones is difficult as they’re hard to match and most styles reveal something. Eh I guess it was better that I couldn’t wear them. I still miss them though! 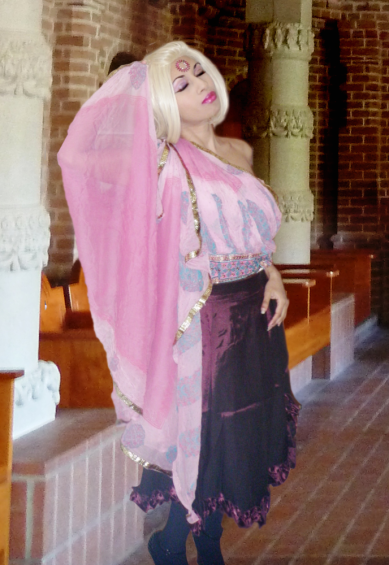 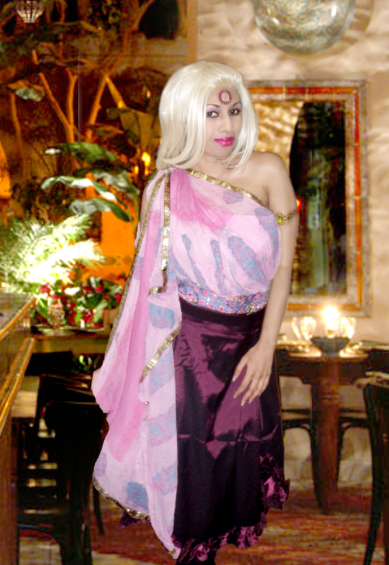 Bright Lights – Outfit of the Day 2