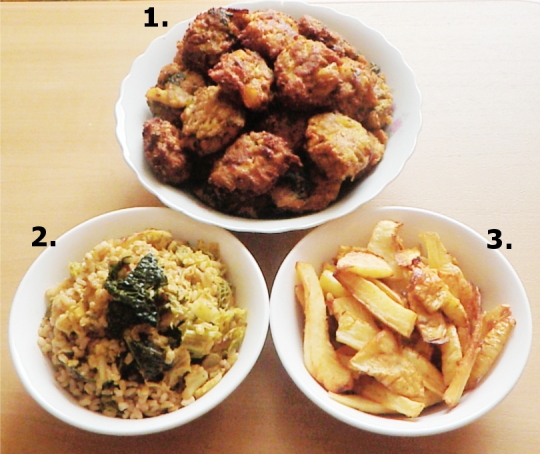 Dish 1 – Asian Pakoras, British Bubble n’ Squeak? Neither, but close and with a twist..

I’d been thinking about Bubble ‘n’ Squeak for a while and mum had been thinking of making pakoras. Bubble ‘n’ Squeak being a traditional British dish using boiled cabbage and potatoes and then frying them in a batter. Pakoras are a traditional Indian side dish where any leftovers are fried with batter; akin to bhajis (which tend to be bigger) and fritters except with fritters the filling is coated with batter rather than mixed in. When made with the intention of as h’ordeurves from scratch rather than leftovers the veg ones are usually made with spinach, potatoes and sometimes onions.

So along came a beautiful Savoy cabbage and I thought “aha!” Other than reminding slightly of Audrey.2 from The Little Shop of Horrors, it would go wonderfully in my panasian style dish and the advantage it has over regular cabbage is that it’s more ‘waterproof’ so won’t get soggy (and can be used as a novelty edible serving plate/bed). However there was the issue of both recipes traditionally using eggs in the batter to make it extra sticky – I decided instead of little pieces of chopped potato I would make a mash and as backup alter the traditional batter recipe a bit more… (Get to that later.)

Don’t like the idea of potatoes? Well I don’t have an issue with them usually since I don’t mind their starch/carbs as long as they’re not made with too many other carb bases. That said the idea of potatoes wasn’t appealing to me today and so I thought “what mashes well, quickly and tastes good?… Parsnips!” Also since it’s the right season for them parsnips are readily available. Another alternative would be sweet potatoes (I would go with the White rather than Orange ones for this recipe).

1/2 Savoy cabbage (can save some of leaves from the whole cabbage before shredding for serving)
1 Parsnip
Soya Milk
1 tbs Cayenne Pepper
1 tbs Turmeric
Oil for frying (Olive, Sunflower or Rapeseed)
Optional – a little oil or vegan butter for the mash for taste and those who really worry about the mixture not holding when fried

Batter
Flour (Any – for pakoras usually chickpea flour is used as it’s thicker/sticky but we didn’t have any 😉 )
1 tbs Salt (Rock e.g. Himalayan or Sea)
1 tbs Garlic powder

Optional – Once completed these taste really good with mint sauce

Difference to classic recipes:
1) Savoy instead of a regular Green cabbage.
2) Parsnips instead of potato (and milk mash rather than water mash but that’s not a big difference).
3) Garlic in the batter. Why? When garlic powder hits water it turns into a sticky layer… Plus we like garlic. 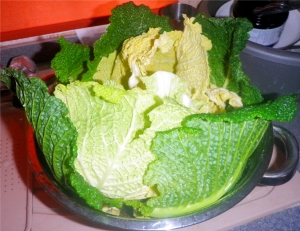 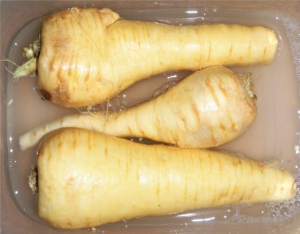 Adjusting differences:
I mashed the parsnips (using mash to make it thicker/creamier than water based mash) as I wanted mashed potato texture, however mash rather than chopped and fried/steamed parsnips are less strenuous on the teeth of very young and old people and also those with veneers who’ve told me that they have issues with crunchy fried and roasted potatoes.

Flour – regardless of the type of flour used, only a little is needed overall, especially if using mash and not chopped potatoes/parsnips. Flour acts as the ‘gelling’ agent and as it is mixed in there shouldn’t be a problem with the mixture separating when fried and with a lot of flour you’ll end up with fried dumplings which have a softer, gooier texture – which is nice but not what I was going for.

1. Making the mash – I sliced 2 parsnips along the grain instead of across/against and added them to the soya milk. Added the cayenne and turmeric. Brought to the boil, left to simmer until soft enough. When done I mashed slightly, removed and put aside half for Dish 2 and then then mashed the rest properly. 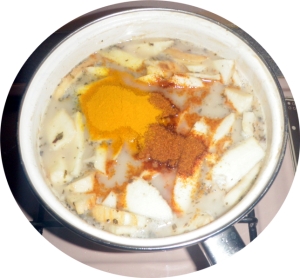 2. Whilst the mash was cooking I shredded the cabbage, put it in the wok (any frying pan will do) and simply heated it to reduce it/cook off the excess water. Once that was done I put aside half for Dish 2 and then added the mash to the remainder and mixed them together. 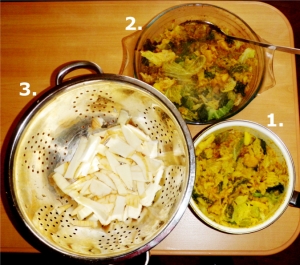 3. Let the cabbage/parsnips COOL before adding batter and frying otherwise the flour will be cooked into the mix rather than a useful coating.

4. I mixed some flour with the salt and garlic and when the above was cool I added the flour mixture to it and stirred. The point was to get the batter mix throughout the veg rather than around it. (See notes about flour usage above.) 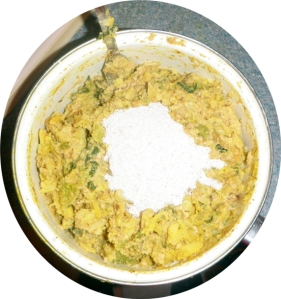 5. Heated some oil in a medium 2l pot, scooped out balls of the veg/flour mixture and shallow fried. You can make any shapes you like, or blobs of mixture – I used balls for overall consistent texture but I also like blobs because the thinner bits end up more crunchy when fried. 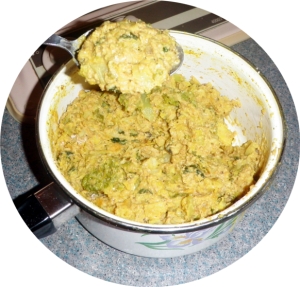 6. Keep an eye on the frying so that you know when to turn them over, once they’re Golden Brown both sides they’re ready to be taken out (taking care to drain excess oil). 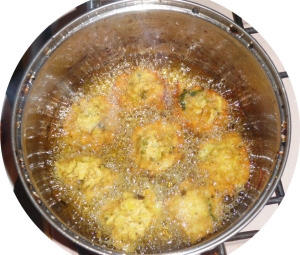 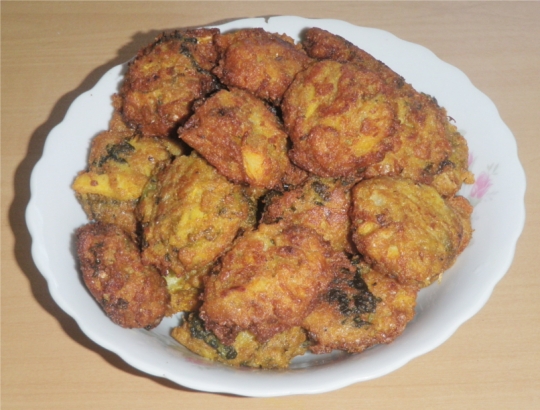 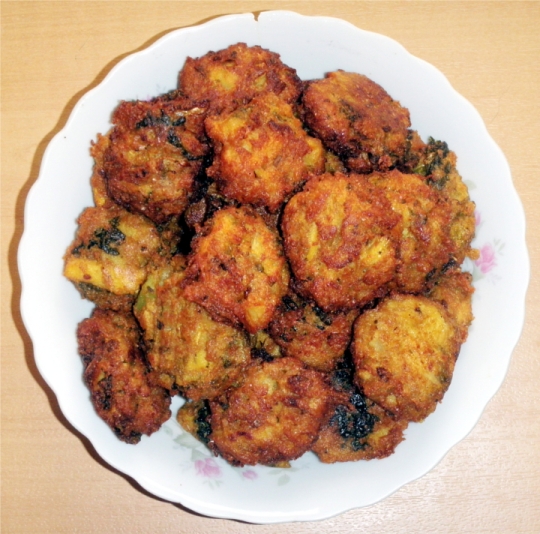