I’ve been put a crappy mood this morning after having been put over a barrel and the weather is miserable but that won’t affect what I say in regards to this post. I’ll start by just saying that I look at V-Day as a day to make people feel extra sentimental about their relationships with each other, not a day to make up for the rest of the year. It’s an anniversary and there are many types of love and care.

So how do I usually celebrate it? I’m a massive gift giver, all year round whenever I see or make something I think someone else would like I want to give to it to them, which is actually not a good thing in reality because when you give people an inch they invariably take a whole marathon, learn to expect it and try to take/trick it out of you when you’re not offering or wouldn’t give anyway had they not deceived you. However – nothing can extinguish my spirit haha! Therefore I’ve taken to spreading cheer and sweet food treats to those around me and if possible spending time with the people closest to me, they generally tend to be female but there’s been a few male best friends/family (my parrots for example) too. I never push the sentiment on people who are decidedly against the day though – that would just make them worse unless they’re open to surprises.

Like many I could get upset over V-Day but why bother? I’m anti-mass consumerism, pointless gift giving (I believe gifts should have thoughts of merit behind them and sincerity) and making people feel like they have behave differently for one day. As originally stated I think V-Day should be a seen as an anniversary, extra on top of the norm not an exception. I see it this way if you’ve chosen someone to have a special role in your life that makes them special to you and you should be treating them better than others anyway. That goes on top of treating everyone/thing else the way you would like to be treated, unless quite frankly they don’t deserve it. Sometimes we can’t help who we love or like a lot but unless there are extenuating circumstances we have some choice as to whether we spend time with them and if they are in our lives because we want them to be then they are worth celebrating. The same is conversely true for people you haven’t chosen but nevertheless take up important roles in your life such as family. There are some who you’ll like and some who you won’t and V-Day is one of those days when you can say or do something extra nice for the ones you like – you can extend that to the others it’s up to you, you’ll have to second guess their reactions and thoughts about your motivations. What I’m trying to say is that if you’re not totally anti V-Day then it can be part of the icing on the cake – not the cherry on top, but still special and you don’t have to partake/support the elements you disagree with.

When I was in college (high school to US folk) there was a group of students who upheld or created a tradition of selling single Yellow roses – that way people could buy them and give them to those they liked. Roses were given to anyone you liked, not just romantically though there were always be a couple of girls who’d have their arms laden lol and needed helpers. Yellow roses in modern culture signify friendship, though interestingly enough originally in the language of flowers it meant/means ‘I don’t like/trust you’. Later in life I learned about V-Day and White Day in Japan and that reminded me of those Yellow rose tokens of affection given in college. On V-day in Japan the girls give two types of candy/gifts to guys; a) the one they have romantic feelings for and b) ‘obligation’ gifts to the males in their lives that are good friends/family and/or have helped them in some way. Then one month later on White Day the males who received obligation gifts give return gifts and if the guy you gave a romantically intended gift to returns a gift it means he reciprocates the feelings, if he understood that he didn’t get an obligation gift in the first place. Many of the food gifts (sweets, chocolate, cookies etc) tend to be homemade and to make obligation and romantic gifts distinct romantic ones tend to be more lavish. Note – The days being gender based are changing with the increasing social acknowledgement and hard won inclusion of LGBT communities and supporters.

Now with all this prattling on about the sweetness/sentiment of the date you may be under the misconception that I can say these things because they’ve been plentiful occasions for me. Nope. I’ve received two valentine’s gifts in this life and from the same guy I was with at the time. They were very nice and considered but there was some feeling of pressure to give presents to each other because of social/cultural tradition. As aforementioned I give gifts for the sake of it any old time, so for my part I felt V-Day to be like a duty but one I didn’t mind especially as I liked to give him things I considered care packages, on his side I think there was a bit more angst and because even with knowing each other well he still found it hard to figure out what I’d like. On top of that it was long distance, the time difference and other obligations meant that we didn’t get to connect much online on those dates. So with not the best V-Day experiences and never having received tokens of acknowledgement from secret or not so secret admirers I could fit into the camp of people who don’t like the day so much or refuse to acknowledge it. But nah, there’s too much fun to be had and I’ve enjoyed V-Day more single! Sure I’ve felt a bit upset on some of those days but heck there are a lot of other things to get me down or p** me off than that! Pshaw! If there isn’t one friend, family member or association, be they human, feathery, furry, scaly etc to genuinely smile at/about and think a happy thought with/for, and if V-Day means something to you or you want it to – there’s yourself! You can be kind to yourself, and if you feel you don’t deserve it then today is probably not going to make that big a difference but like any other day we can focus on the how we can be people that we’d find it easier to live with.

Valentine’s Day as a concept by itself is a luxury, an extra, and I see that for what it is, I don’t pretend it’s more than that and I don’t try to dismiss it. Many of those able to even give/receive on such a day are fortunate in some way and there’s usually someone/thing that cares about them, even if it’s far away or even if they don’t know it, or we’re at least adept at pretending things are ok or better than they are. For many beings they really do only have themselves to rely on and there are many who are lonely in the biggest of groups so all they have is the double edged feeling of hope hence I don’t begrudge those who like the concept of V-Day and celebrate it in a way that tries not to hurt others.

Note – if contemplating giving flowers as a gift, why not think about giving potted ones or even fruit/veg plants, there’s lot’s of miniature ones available for those short on space. For those short on light/heat there are more robust varieties. 🙂 If going to buy food presents, why not try one of the many allergy free or reduced recipes available for treats especially for those who aren’t sure what their recipient can/can’t eat. You can always customize recipes 🙂 For couples, friends and family members it can be nice to make them together too 🙂 or as in my case I mostly make ‘em, and my better self (mother) supervises 😉 though assists when both my hands are mucky or I’m doing something wrong.

Whether you celebrate it or not, think about it or not – have a GOOD day!

On to the outfit, sheesh about time eh?

V-Day wouldn’t be V-Day if I wasn’t wearing Red, Pink or some bright/cheerful colour/print or accessory now would it. So how to make today’s outfit a bit more than usual in comparison to my own personal style? Instead of one Red piece I blew caution to the wind (thank you wind) and went for the whole outfit in a bold, vibrant shade of Red and since I just did my roots making my hair look more luminous than usual I thought: what combination with Red and light Blonde (almost White) really works well together? Black of course. So the Black ribbon, lipstick and eyeliner design complete the look. It’s not a very gentle look but hey it suits my personality – strong and unyielding tough love (firm but fair), tries to help in a tangible way, dependable and gets things done. 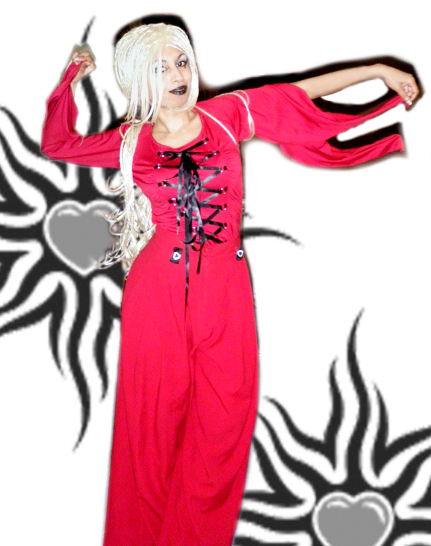 Then just mucking around, thought I’d do something different for the camera :-S 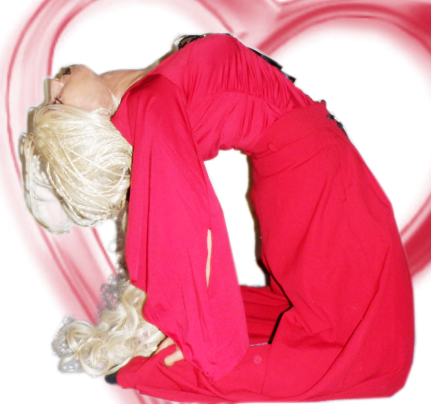 Credit for the heart brushes goes to Obsidian Dawn (I did the rose myself) checkout their site for awesome Photoshop and Gimp resources, free for non-commercial use, otherwise read their T&C.

I once wore this outfit for the V-Day, after I wore it for Xmas:

And there was this one:

And there was a dress I had akin to the Pink one from Ms Monroe’s ‘Diamonds are a Girl’s Best Friend’ though mine was Red with White underlay, and in which I took some cute pics for said long distance beau. Unfortunately he only noted how the dress looked too big on me, oh the humanity – but I liked it! I wish I had those pics so I could post one for you to see how beautiful the dress was but you’ll just have to take my word for it. It was made by a US women’s union of seamstresses around the second world war who took a stand for their rights regardless of race, background and citizen status (as many were newly immigrated and hence treated even more complacently) and were able to become an official formal union so that they would no longer be underpaid and overworked. I was very honoured and proud to have it in my care, even for a short while. Viva la vintage eh and for today, viva la Vendredi and viva la Valentines!

In the next post I make later I’ll be showcasing fashion bloggers who’ve also dressed up for fancy Friday :- )