Short Circuit is a film about the possibility, reactions toward and relations with artificial intelligence that is or becomes sentient and in this case cute, friendly and sassy. It’s more of a personal take on being friends with a sentient robot one on one rather than as a group/’species’ and overall is a comic sci-fi with an unusual buddy pairing. It was popular enough to get a sequel and even though I love both films the first one holds a special place. There’s a number of familiar faces in the cast including Steve Guttenberg and G.W. Bailey (both figured prominently in Police Academy) which help to set the tone since they’re acting like characters we already associate them with instead of treading new ground and overall the film has a comfortable/familiar feel rather than scary, awestruck or threatening sci-fi.

Interesting note 1) – The Indian guy is not Indian, it’s Fisher Stevens.
Interesting note 2) – There’s a number of cultural references in the film i.e. music and other famous flicks. That helps to make it more ‘real’ and relatable to people who remember those times well but conversely dates the film and makes it less recognizable to younger people.

Being electrocuted is a recurring theme in bringing beings to life or sentience and Short Circuit is no exception. The military is developing robots for warfare (big surprise) that can not only destroy things efficiently but pour you a gin a tonic. Their newest line of robots, named Strategically Artificially Intelligent Nuclear Transport or ironically SAINT for short are the products of their latest efforts, but when you make things so well are you bringing them closer to the possibility of turning into or doing things you wouldn’t expect? Saint Number 5 goes through a series of inexplicable events that causes ‘it’ later him to not only gain his own sentient identity but to escape the secure laboratory facility. The scientists that developed him (think the predecessors of The Big Bang Theory) are in the usual ‘but I want my technology to be used for the benefit of humanity’ vs the military bind yet they still work for the military because you know, they wouldn’t get to play with expensive tech otherwise. The two scientists behind SAINT’s development in particular are sent to retrieve their missing child after the usual gung-ho boys with toys and SAINT No: 5’s own siblings fail to get him back. The rest of the film outlines No: 5’s physical and mental journey of discovery, meeting a best friend who tries to help them both live free and arguments for and against whether a robot can think and feel.

Why it’s a Fave

No: 5 is an armed to the teeth weapon/solider of war but meets a passionate and compassionate woman who is trying to make enough money to look after her dependents whilst fending off external influences like a parasitic ex-boyfriend and regulators, yet takes him in thinking he’s an extra terrestrial and does her best to help him learn and be friends. Not the usual combination in a movie but they are so endearing and peaceful with each other minus an argument when she finds out he’s not an alien but even then, while she’s ranting and having a go at his origins under the belief that he’s a non-sentient machine she still talks to and argues with him like a person and treats him with that respect. They are very protective of each other. Both only really have themselves to rely on, yet instead of being suspicious and scared of the other they become very close. It’s not as if they were lonely before meeting, but their pure friendship is really beautiful and they feel better for it. 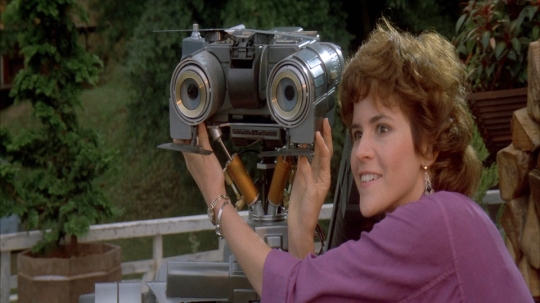 Even though on the surface this film might seem superficial there are really heart moving, wrenching as well as warming and comic parts and there’s quite the elated feeling at the end when No:5 renames himself as Johnny 5. Technically the film is dated but in comparison to modern equivalents there’s something charming about the seemingly simple robot design. That’s emphasized by details like Johnny’s voice changing from a creepy voice scrambler style and his eyes looking less threatening when he becomes ‘alive’.

All in all who wouldn’t have liked a friend like Johnny? He reminds me of my parrots; sincere, charming, loyal/devoted, intelligent and my best buddies and I consider myself lucky to have had them in my life/met them. We’re family and so akin to how I feel about them I could imagine having been somewhat like Stephanie and meeting someone truly special who can and does mutually appreciate how special you are, yet others would think of them as ‘things’ and you as irrational.