Hello sweet toothed people! 🙂 Happy National Doughnut Day to those in the US and donut lovers worldwide 😀

This isnt’ going to be one of my usual picture tutorials because we just made them and I hadn’t intended on posting but these little treats are so delicious I had to! 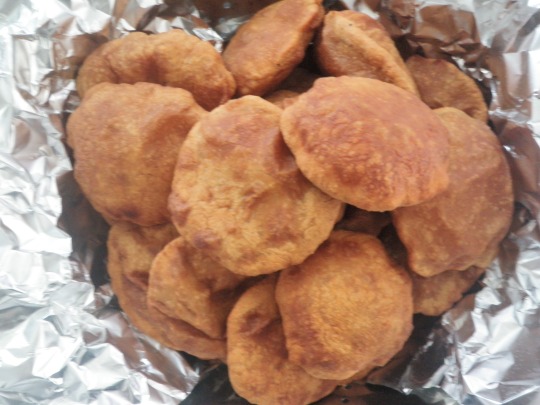 Traditional doughnuts take a lot of time, effort and quite a few ingredients to make but remember my post about an Indian bread called puris/pooris? Ah it was ages ago so I understand – HERE it is for reference, I call them ‘balloon bread’ because they’re basically simple bread bases that inflate/puff out whilst quick frying.

This week I’v made a few batches of puris, traditional to unconventional e.g. Pink ones by replacing the water with a tomato, beetroot and carrot juice blend 1/3 each. That improved the texture by making them softer and maintained their shape longer as they were made to last AND I could pierce them, push them down yet they popped back up!

Today mum and I decided to make sweet ones (eating them right now) and to us they taste like doughnuts but without the insides/filling so they’re much lighter and easier on the stomach. They’re still moorish though so restraint is necessary if you don’t want to eat them all in go! Remember that fried doughnuts are not as fluffy/floury and dry as baked ones.

I didn’t jot down the amounts I used (and generally down use exact amounts in cooking a lot of time) but using my Puri/Balloon Bread post, and if necessary my traditional fried doughnut and multi-grain/seed doughnut recipes this post is a guideline.

Flour – I used organic, stoneground, plain White flour. Obviously which flour used is upto the individual and taking into concern any dietary needs like a gluten free flour.

Pure/Filtered Water and/or alternative milk e.g. soy/almond/rice/oat – enough to make into a dough.

Sugar – I used dark Muscovado but any unrefined sugar will do. The amount of sugar you use depends entirely on how sweet you want them to turn out and what kind of sugar you use e.g. dark muscovado isn’t as sweet as molasses and light muscovado is not as sweet as demerara. TIP – taste a tiny bit of dough, it should be a bit sweeter than you prefer as the sweetness will decrease a bit in cooking.

TIP – If you don’t want to use as much sugar you can always use fruit juice and/or water – if you have a fruit juice such as grape, apple, pear on hand you can substitute or blend fruit juice with the water. Don’t mix fruit juice and milk though.

Oil – For frying, I used organic sunflower oil. We used a 2 litre pot for this filled approx 1/4 way with oil – the shape/height of the pot meant that we deep fried.

Tray or board for rolling

Rolling pin or jar/glass/bottle – anything for rolling

Big container/bowl for the finished items

1) Firstly I put enough oil in a pot and left it on the cooker (not on).

2) Then I spread some foil out on a work surface/counter to put the uncooked puris on whilst waiting to be cooked. NOTE – you cannot place them on top of each other as they will stick and you’ll have to start over.

3) I filled a mixing bowl with flour and salt, and mixed thoroughly.

4) I then added the sugar and again stirred through thoroughly. I can’t remember how much sugar I used but it looked approx 1/4 worth of the flour used though mum is saying 1/3…

5) Added the water and mixed with a spoon (mum prefers a knife) until it wouldn’t mix anymore and so had to wash my hands and kneed it into a dough.

6) I added more flour as I needed, particularly as this flour is quite elastic and takes in water becoming sticky easily – I can think it’s done and then it goes sticky plus dark Brown sugars melt easily turning quite liquid-y.

7) Turned the cooker on to heat up the oil enough to quick fry.

8) Spread some flour on my rolling tray, then grabbed a small ball off the dough to roll. I say a small amount/ball but I have small hands so approx half a hand sized amount would be better for average+ adults.

9) Rolled the dough into a proper ball within my hands/palms and then flattened it on the tray, then rolled into a circle or circle-like shape and laid it on the waiting foil. I repeated as necessary until the dough was finished.

10) Meanwhile mum was frying the circles – it only takes a minute or two on each side maximum because they puff out and turn Golden Brown quickly. TIP – if you are making these alone, it’s best to either roll out all of your circles and then fry or if you’re really fast at rolling make a few circles and fry at the same time.

11) Once cooked, remove from pot/pan and put in a waiting plate/reciptical. NOTE – If they are not finished in one sitting they can be kept in a container with a lid or as we personally do, cover them in foil. If you cover them completely they tend to go abit dry/hard but I find leaving the foil open partway leaves them soft. 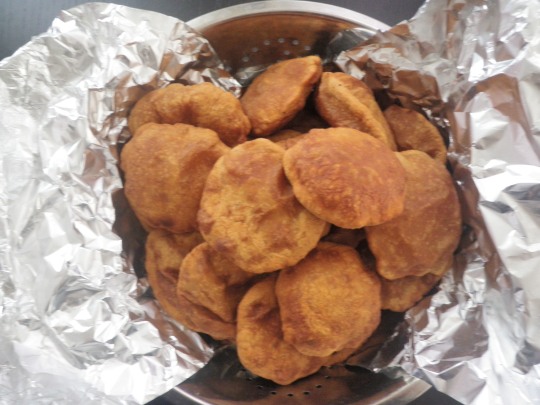 As you can see these aren’t solid like doughnuts because they’re filled with air hence easier to bite into and chew imo (though depending on the ingredients – see into – get firmer and/or more elastic like if left over days).

Et Voila! Much simpler, no fermenting, doesn’t have to such a rare treat and still very tasty! They can be eaten by themselves, stuffed or topped with both savoury and sweet additions from chocolate to dips and puris in general can be eaten on any occasion/with most meals.