Ok, fine – light hearted post time and one in which I can poke fun at myself. Drag out the old photos and generally think “Ay caramba! What did I used to look like?” then look at oneself (ok imagine, looking is too painful) in the mirror and think “a lot better than I do now! Uh I look and feel like I’ve been burned alive, buried, and drowned but not necessarily in that order, but like hell about covers it.” Why can’t I go back to looking the way I did when I was pre-17.5, at my very best! Talk about majorly quick downhill acceleration, by the time I was 19 I was a mere shell of myself! (All these pics are age 20+) Now I’m almost 33, let me die by 45 so I don’t end up looking like a walking mummified person or creature from the something, somewhere or other. P.S zombies and vampires need not apply.

Unfortunately I don’t have any pics of exquisite millinery but these crusty old candids will have to do, except…

What’s that on my head, that didn’t quite make it into the photo that time?

Haha the best headgear ever! So it stamps, claws, bashes, bites whilst knowing where your pressure points are and makes your limbs go numb, tries to dictate the direction, tries to pluck your eyebrows, picks at your dead skin/spots and screams in your ears but hey I prefer live with personality than dead and stuffed. There is definitely such a thing as evil fashion.

You can’t fail to look cool (ok maybe I do up there, fine I do) when you’re in the company of a parrot, they look gorgeous no matter the angle or lighting, even with feathers out of place they look stylish – it’s like a whole new look. Me, jealous? No way, they’re too adorable for that. Feisty and fabulous. Brains, beauty, brawn and brilliance they’ve got it all.

Ok I actually look cool in that one and no that is not a corset or ‘waist trainer’ as they’re called nowadays. I’m against most corsetry and disfiguring garments in general (except support items like bras and back braces) especially if worn for hours and regularly. I put up with torture contraptions like high heels for ‘special occasions’ but even then they’re chunky and soft. That’s a wide belt in the pic and it was just my size instead of being too small and called my size; I like all my organs in place and functioning properly thank you.

Back to my candids with not so mad but pretty bad and some normal hats, I couldn’t put you or myself through scrolling down separate pics so I put them together to hopefully mask their inadequacies and highlight their good points of which I’m still trying to figure out. The background is nice!

Oh wait, but first you see this hat below, it gets special mention because it and I were practically inseparable for years despite all the jeering I got from strangers (seriously). I had a bag of ribbons to adapt its look for my outfits as well! I finally had to give it up after someone decided it folded nicely and put it in his bag, that marked the beginning of the end. 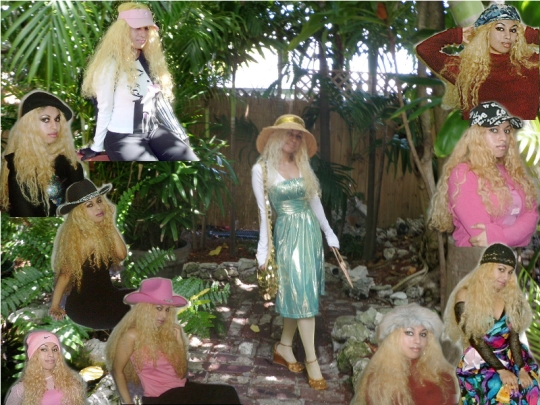 (Those are not white tights in the main pic, they’re gold but didn’t show in the pic, I’m not that style challenged though that’s not obvious in some of those pics… Those stetsons, why? Youth is wasted on the young.)

Anyone remember this? The ‘Big Brain Bar’ full of humungous hat patrons, some concealing small people with guns in said hats.

2.5” SATA/IDE HDD Enclosure – If Only I Could Turn Back Time

What’s in a Name?