We were forced to read many weird and mostly pointless things in primary school, in comparison to the subjects I’ve heard kids learn today I’m ever so slightly envious. The children of people I know are learning modern foreign languages and archaeology as pre-teens! I had to rely on the other ‘ethnic’ people I knew to learn about their cultures and understand their conversations. Then we had the privilege of being grouped with and teaching the year younger to us due to lack of paid teachers. Only the most competitive actually got anything out of the system; praise be to local libraries as social and knowledge hubs (precious places even now in the age of the internet). It wasn’t a total waste, maths was taught better there and we were told what we’d be studying a term in advance so we could get a head start and inspire ourselves if we so chose.

Two of the weirder authors we had to read were Goethe and Chaucer – are Faust and The Canterbury Tales really appropriate for little kids? Most of us didn’t understand the plots let alone sub-text so not much in the way of educational value. A bit like reading the collected works of Shakespeare at around age 10-11 (which I did thanks to Reader’s Digest though that doesn’t quite compare to my sister carrying around Great Expectations like a security blanket at around 7) and knowing it was above my head and not appreciated until you a) either have to act out a part in a play (hey I made a pretty good Mercutio) and/or b) watch a play, so that even if you don’t get the lingo as it’s written you can see context and usage to understand it better.

When I visit a place my first stop after settling is generally the tourist office/visitor centre hence it was from a book of discount tickets that I learned of an exhibition/’immersive art’ show called ‘The Canterbury Tales’. Being a smallish town this attraction was easy to locate though what I immediately saw was a bunch of red banners, the church the attraction is attached to and the gift shop that can you visit directly from the street; the entrance to the actual exhibition is on the side highlighted by red rope posts. 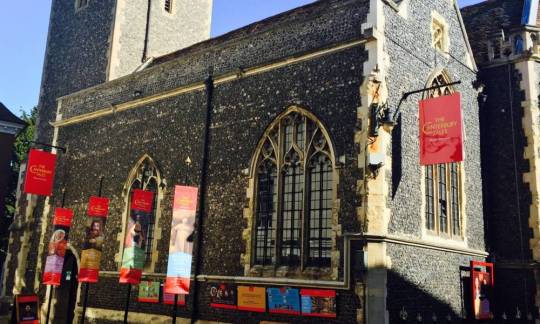 The foyer is modern enough, not huge by any stretch of the word so whilst they take groups I would recommend splitting into smaller units if 6+ people. As I was alone I was asked to wait a few minutes until there was a group to go round with – I waited 5 minutes and there were 8 people in my group, I would have preferred if it was smaller that’s how increasingly cosy the place gets.

We were given audio guides and for some reason I can’t remember how the headphones were provided but they didn’t look used by lots of people… We were then allowed to go into the ‘show’ – a walkaround presentation of 5 of the most famous tales (out of the 24). It’s becomes very dark like night time and you move from 1 tale to the next stopping at each to watch automated figures act out the stories and light up as you listen to the audio version. I could hear the audio fine and the voice actors did an apt job of conveying emotion though I’m no expert on Middle English pronunciation so it’s semi-convincing. Walking between main sets was probably the most interesting because you could go up to and touch things whereas in the main areas the scenes are out of reach and there’s obviously space for the group to stop. That said they do make good use of the height of the building so were able to show upper floors of houses and stairs for example. There were also some human beings dressed as common folk at parts but unlike other ‘immersive’ and/or interactive attractions such as haunted houses or the London Dungeon they didn’t engage with us. 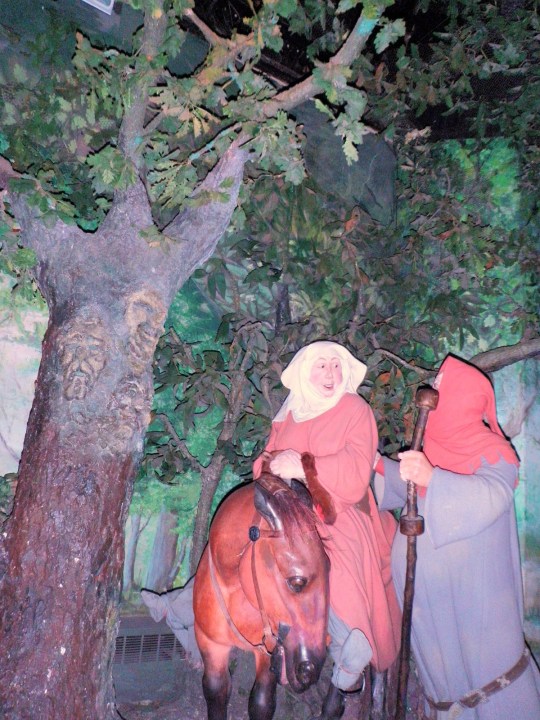 From queuing to the end of the tour leaving us at the gift shop took approx 45min. Essentially you start in the historic, vibrant and really quite modern town of Canterbury with a HMV media store opposite and then you walk into an attraction that takes you back in time somewhat. Ever been to Madame Tussauds or similar? It’s like that but older in style, you’re also less likely to get crushed in the crowd, mown down by over eager students and sworn at in various languages from guys not liking their ‘flattering’ attentions being nonreciprocal. The waxworks here (if that’s what they are) had far better attention paid to their skin tones and features. Tussaud’s makes moulds of faces but have you seen their ridiculous attempts at non-Caucasian skin (Aishwarya Rai and Beyonce are a joke) and the serious lack of distinguishing features on many; most of their figures do look the results of plastic surgery at least at The Canterbury Tales they have character, facial expressions, uneven skin tone, lines/wrinkles and actually look like they’re taking part with focus in an activity instead of a vague glassy eyed stare into the distance and the animal figures were equally impressive. If Tussaud’s is for our greaters and betters in their best light or how they would like to be presented then The Canterbury Tales is ‘Spitting Image’ (1984-1996 political satire show) in both story content and visage. Actually Tussaud’s has a mini roller coaster ride that is a bit on the ‘dark side’, that’d make a closer comparison to the feel of this place.

I went on a Bank Holiday weekend and it wasn’t too busy (hey I was the only person in the Kent Museum of Freemasonry the whole time I was there) but overall it’s a bit like being in a cinema and unfortunately for me the group members were talking all the way through even in the main areas where we’re supposed to listen to the dialogue, some took photos with the flash (prohibited) and generally hoarded the space (imagine having someone with a big hat or super high hairstyle in front of you in a cinema). We did have a costumed guide but they didn’t say/do much other than how long we were allowed in area and moved us along usually before I got to see the parts I wanted to see since the families had pushed past me to the front and I often ended up near doorways or nooks.

(I always seem to get people’s kids kicking me in the back in theatres/transport, or being placed into the seat next to mine if it’s empty or having already taken my seat the parent(s)/guardian(s) telling me where their seat was and sometimes to top it off both children and parent(s)/guardian(s) making fun of the way I look although children aren’t necessary for that).

The older pre-teens were interested and the younger ones varied; they were all more interested in the exhibits/scenes than their audio which is understandable. None were scared but I’d say bear in mind it’s an enclosed space and unlike museums that have quite clinical exhibits much of the time behind glass, here you are walking through and are almost a part of the scenery, it’s close up, dark, dank and though they claim it smells like medieval times it only does so a point or two but when it does it pongs temporarily. So if you have/know children of a nervous disposition, not keen on the dark or claustrophobic this is probably not the place for them. In terms of educational value I thought the Canterbury Heritage Museum was more informative whilst still child friendly but The Canterbury Tales has novelty value and is something for fans of Chaucer/The Tales. Having read other reviews of the place it seems that some groups have more input from the human guides but the quality of which is obviously dependent on the individual’s knowledge, oratory and mood.

One wheelchair per tour is allowed, if more than one in a group the group will need to be split – having read other reviews I think they offer a wheelchair and someone to push it but best to check beforehand.

Unfortunately I don’t remember what I paid with my discount but the standard prices are:

They also offer joint tickets with the re-opened Westgate Towers.

As with  most attractions The Canterbury Tales has special events held at various times of the year, the current one is Halloween so every Friday and Saturday night in October they are holding ‘The Terrible Tales’ – the journey to Canterbury being plague ridden and suitable for 14+ years old with £8 per head only 😉

I thought it was nice touch that visitors are called pilgrims going on a pilgrimage through the 5 tales akin to the pilgrims in The Tales themselves where they journey from London to Canterbury Cathedral. 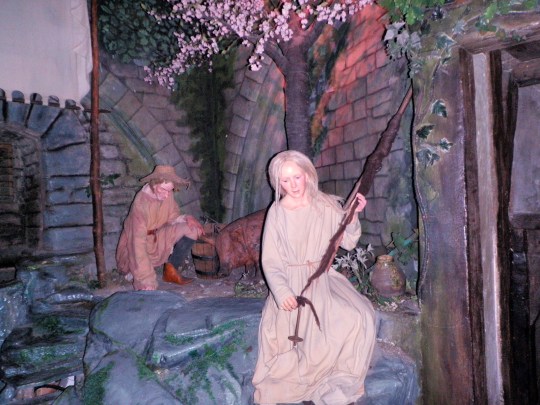 Did I learn to like those tales more due to this tour? Not really… I’m no stranger to reading old literature and not offput by verse, prose and epic length, I appreciate their cultural value for information on custom, class, language, politics, architecture etc but there’s something about The Canterbury Tales that doesn’t really appeal to me. Then again I can’t say I’m a fan of many of the things I learn but continue learning. The Tales play an esteemed and significant part of British history particularly given their content is both controversial and telling of human behaviour and the church and that they were apparently incomplete at the time of Chaucer’s death. Unfortunately if you’re not familiar with the text/don’t listen to or understand the audio and I didn’t completely (remember they were written in the 14th century but he also had his own eclectic style) – what comes across the most in the tour is the arguing and carousing though a lack of pilgrim spirituality in favour of materialism is a theme in The Tales on the whole.

In this case the effort put into the presentation is evident but whether the look and feel of the mechanisms being tired/dated is intentional or not the tour does feel a bit stagnant at times. Like with watching a play you don’t always learn more about the author or motivations for the play itself but at least the play should be enigmatic and engaging, unless you enjoy The Canterbury Tales or are enthralled by the equivalent of the limited mobility dinosaurs you get in some museums and parks the ‘immersive art’ wears thin and I was glad the tour wasn’t longer. I’m not particularly a fan of audio tours so that may have been a factor and I would have liked to have learned about how the sets were/are made and maintained. I feel places like this are important because they add to my knowledge and experience but I think audiences are a little too modern and ‘sophisticated’ to get the most out of it – it needs a better balance of old and new as well as context i.e. their poignancy given Chaucer’s professional life and times otherwise it feels a bit like a theatre of adult nursery rhymes.